The Coast Guard ends operation Almirante Storni after a week 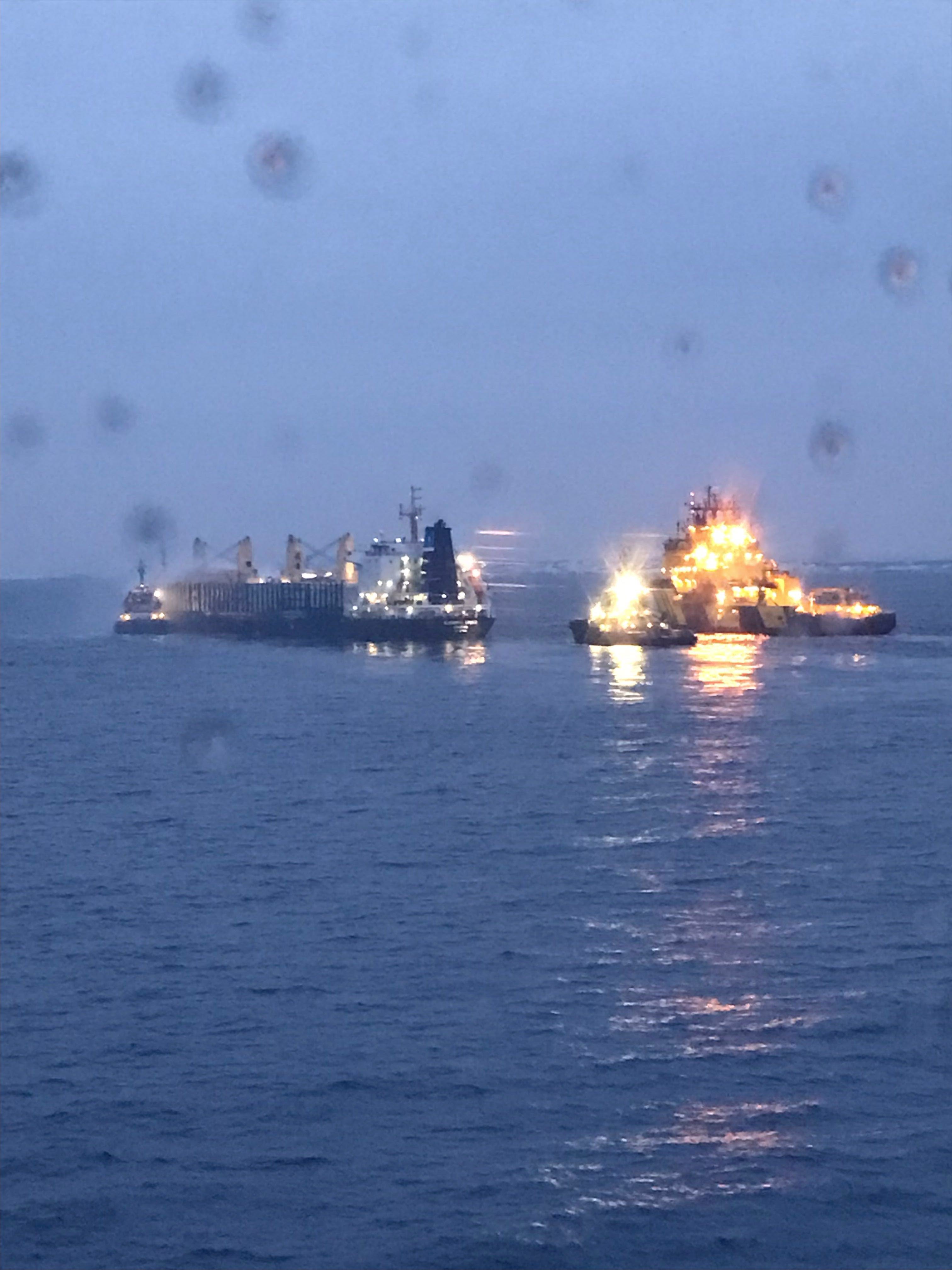 The ship is now at the quay and the municipal rescue service takes over responsibility for the extinguishing. Photo: Swedish Police.

At 6 AM Saturday, work began on moving Almirante Storni from the anchorage outside Vinga to Scandiahamnen in Gothenburg. Just before 8 AM the bulk carrier departed, assisted by several tugs and coast guard vessels. At 10.40 AM the ship was mooring.

It's time to end the presence at Almirante Storni. All Coast Guard units and personnel restore and return to regular areas of operation.

- Overall, it has been a successful effort. After a very strained and vulnerable situation, Almirante Storni has received and reached an emergency port and the difficult situation we have had for many days is now over, says the Coast Guard's task leader, Mattias Heneborn.

We have conducted coastguard operations along the entire coast of Sweden during this period, but of course redistributed large resources to Gothenburg. For everyone at the Coast Guard who worked with the operation, there is now a recovery and a return to regular operations.

- For us, the result is good. Now we focus the work on documenting and managing the experiences of the effort, says Mattias Heneborn.

At the same time, the preliminary investigation, led by prosecutors, continues to find out what may have caused the fire. The police authority is responsible for the investigation, but the Coast Guard assists with investigative measures.

Questions about the rescue work that is going on in the port are referred to the Greater Gothenburg Rescue Service.

The transport of Almirante Storni with burning ship cargo followed the salvage  plan, that was presented and decided on Friday. At a cruising speed just under four knots, the ship used its own propulsion towards the appointed berth. The municipal rescue service took at the same moment over responsibility surveil the fire extinguishing by the contracted partners of the ship's owner.

- Everything has gone according to plan so far. But imagery we got from the police helicopter show that it is still burning in the cargo. Now it's time to put out the fire, comments Mattias Heneborn, rescue leader at the Swedish Coast Guard.

Almirante Storni's shipload has been burning for a week. It was last Saturday that the alarm went off. During the past week, the rescue operation has increased in intensity.

The Swedish Coast Guard's largest combination vessels KBV 001 Poseidon and KBV 002 Triton have continuously worked to extinguish the fire. On Wednesday, the Norwegian Coast Guard's vessel KV Bergen joined the rescue operation, as did the offshore vessel Viking Loke, chartered by the rescuer hired by the Almirante Storni's shipping company.

- Many actors have collaborated during the past week, says rescue leader Mattias Heneborn.

The situation on Thursday evening before the fire on the ship's cargo outside Gothenburg remains stable. The extra extinguishing resources provide an increased damping effect. But the fire continues, as do the efforts to lift the situation and bring the ship to port.

A slight improvement in the fire fighting can be seen. The water volumes are dampening more now with the increased resources at the site, in combination with calmer weather.

- My assessment is that since such resources are required over such a long period of time, without still being able to extinguish the fire, we are approaching the situation where a rescue must take place, says Fredrik Hallerström, the Coast Guard's rescue leader.

- There are many actors involved and extensive cooperation is required, on several levels. The situation remains worrying. Now the weather is permissive for a change, says Fredrik Hallerström.

The police helicopter has again documented from the air. Tomorrow, further heat investigations are planned with drones from the rescue service. The result is important for future decisions.

A preliminary investigation is underway, led by prosecutors. Initial interrogations hav been held on board by the Swedish Coast Guard.

The fire broke out at approximately 3 pm on Saturday afternoon, December 4th. The Almirante Storni’s cargo is timber and the fire began in the timber loaded on foredeck above the hold. As the timber is stacked and burns easily the work extinguishing the fire is complicated.

The crew remains on board, together with officers from The Swedish Coast Guard and the Rescue Service. No injuries have been reported and the Almirante Storni’s capacity is limited but the vessel is still functional.

The Swedish Coast Guard is responsible for environmental rescue at sea, the focus apart from extinguishing the fire is also to limit possible oilspill and pollution. The aim is to gain control of the fire and take the ship to a designated quay where the fire can be extinguished.

For imagery, see below, or the photo gallery, which includes video.

Media is free to use the photographs and video, with credit to Swedish Coast Guard. 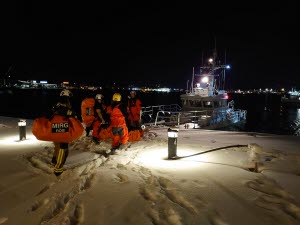 MIRG handlebars go on board KBV 310 for transport to the casualty. 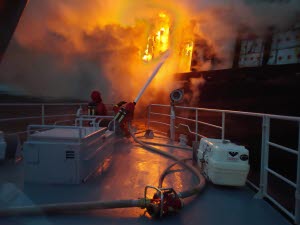 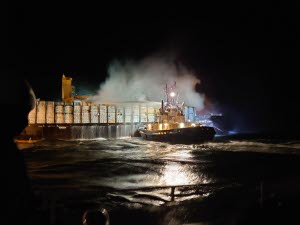 Several tugboats are participating in the firefighting work

Aerial photo of the fire at Almirante Storni 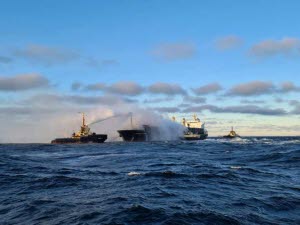 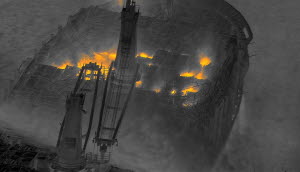 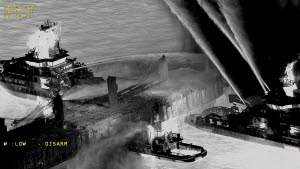 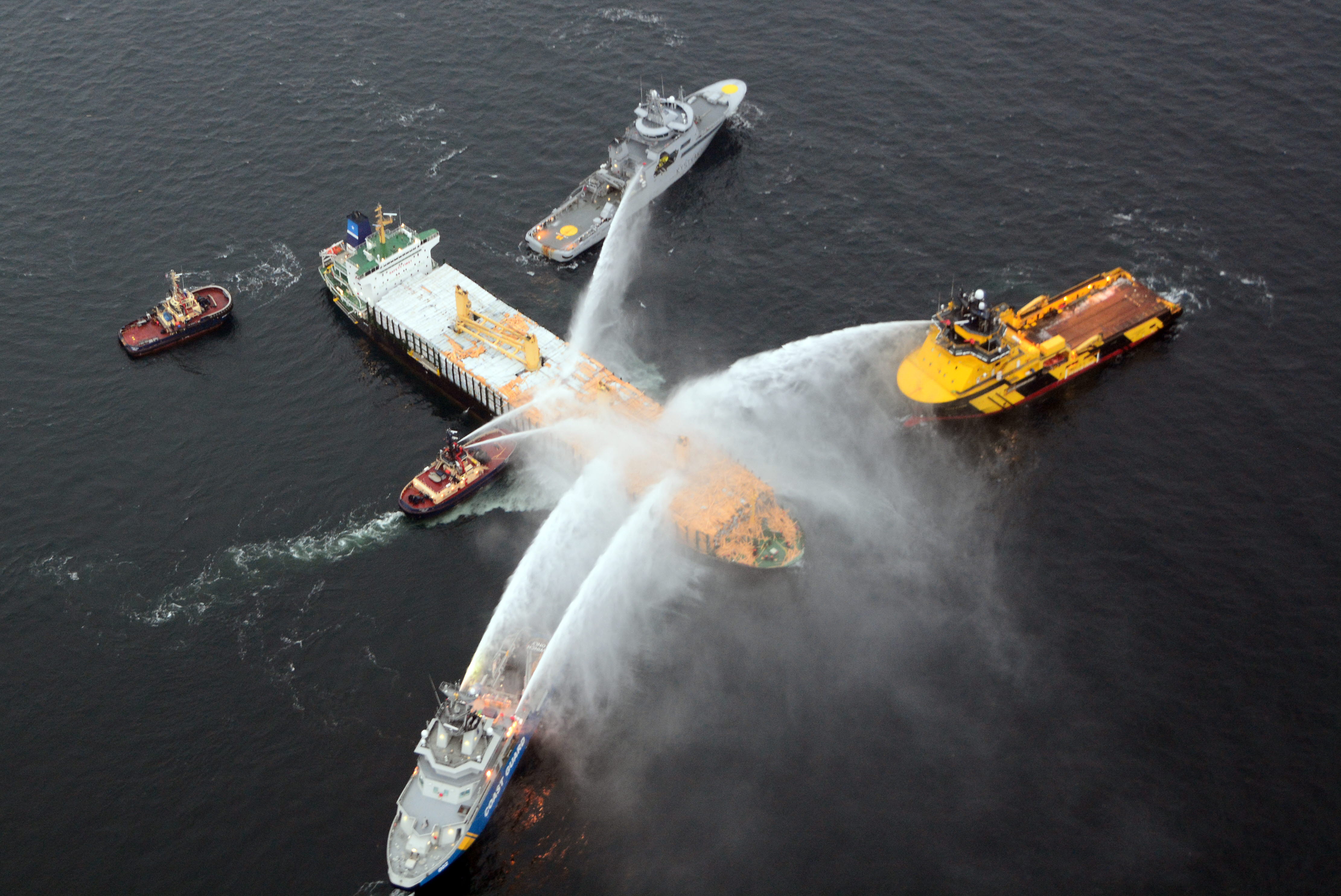 Photos and film for download. The images and film may be used free of charge.